A cookie
So tiny, yet so full of joy
For whoever gets to eat it
I saw a cookie
A few weeks ago
That I really want to
Sink my teeth into
Such a nice looking cookie
I’m really sure
It tastes pretty good
God I want a piece
Of that cookie.

Also known as Mmm...A Cookie! and the inspiration for one of my first film  school projects. It's the first Hiroshima Club poem to transend media! Enjoy the movie below who also happens to feature the author in one of the starring roles (she plays the friend of the girl who is trying to hook up with the goth guy.) 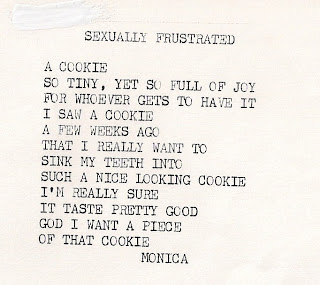 Posted by Aralis at 9:47 PM No comments:


Fish and Chips
By Unknown

What is Arthur’s Treasure? Is it his girlfriend’s box
That smells like fish and he munches on it while
Watching old 70’s reruns? Or is it the secret way
He batter his fish with that special homemade
Batter. Whatever his secret  is, we will never know
But it sure does smell fishy in here.

It says Unknown, but I'm pretty sure this was written by Monica. She would get this intense hatred for random stores in the mall. Not that she had ever shopped or eaten there, if she could see it from the food court stand where she worked and she could find any reason to disapprove, she would write a poem about it.

I must say this is a particularly unpleasant drawing that accompanies this poem. I can't even think of anything else to say about it, I just don't want to look at it anymore.
Posted by Aralis at 12:53 AM No comments:

So this was supposedly written by the dog...I'm gonna go ahead and blame in on Anastasia. I wish I had a really good story about how this dog had a really bad problem with alcohol and would get really slutty...actually I think it would be funnier if she was a mean drunk and went around telling people what she REALLY thought of them.

I have no idea why the accompanying graphic is a TV set that is either endorsing snacks or a 70's cop show. On a semi-related note. when we were little Monica had a crush on Erik Estrada who played Officer Ponch on CHiP's so she cut out a picture of him off the tv guide and ate it. Not really sure n the logic of that, but we giggled about it for years. We'd be laying in bed trying to go to sleep or something and one of us would say "Remember that time I (you) had a picture of Erik Estrada and I (you) ate it?" And we would just laaaugh...That kids, is how we kept ourselves entertained way back in the days before the internet.
Posted by Aralis at 12:46 AM No comments:

This has nothing to do with anything and it's not even from the same time period as the Hiroshima Club, since I just made her a few weeks ago but she came out really good and I felt like bragging. 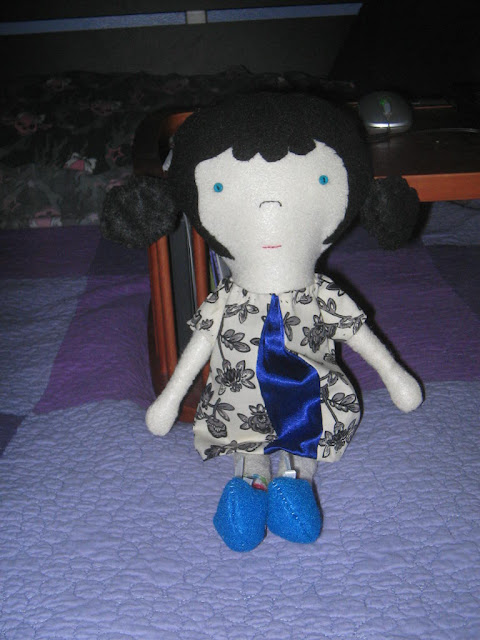 Her name is Olive.

I have no  idea who this Anastasia was. I think I have mentioned this before. All I remember is that she was a friend of Monica's and that she owned Anise. I wonder if she will ever come across this and be really offended that I remember her dog but not her. I wonder if she's the one who drew that fabulous portrait of Anise. But most of all I wonder, who the hell was Anastasia?
Posted by Aralis at 11:59 PM No comments:

I always  forget who's dog Anise was. I've asked Monica  a million times and I still always forget. I just know that it was some friend of hers.
Apparently Anise was very popular at the time because there's quite a few poems about her coming up and even a Reader Profile even though I don't think she ever actually read the zine. She might have peed on it once though.

BTW, I must take a minute here to say Vienna Sausages are very underrated. Yes they look more like erasers than actual food and that water that they come packed with smells kinda nasty, but my mom has been making those since I was little and I kinda like them. Must be the same way Americans feel about Baloney. Yes, I know I'm technically American too being that I was born in the US and I live here but I mean the kind of Americans without Cuban parents to make them yellow rice with Vienna sausages.

I never had fried baloney until I was like 23. 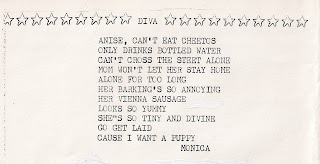 Reader of the Month Mystery Edition


Reader of the Month

Name
Someone who'd have a hissy if she saw her name here but would not regognize her answers so I'm just going to go ahead and print them anyway since I'm running out of issues to reprint.

Place of birth
Miami
That will narrow down the possible suspects.

Hair color
Red with blonde streaks
I don't remember this, but we all had many hair colors back then.

What do you spend your money on?
Food, thrifting, bills
Yeah, we were big on thrift shopping back then, before it got mainstream. Not that I give a crap about it being trendy, but now that the thrift stores know the value of retro clothes, they price accordingly. It used to be nothing was over $5 and there was even one Goodwill store where all the clothes were 60 cents ALL THE TIME!

Most fanciable being in the universe?
Jim Morrison (if you knew me, you would know)
we were best friend at the time and I don't remember her ever mentioning Jim Morrison ever before or after this interview.

Most disgusting thing you’ve ever had in your mouth:
1 year old tic tac
How does that even happen?

What are you afraid of?
Little things that crawl under your bed at night and tickle your toes
When I was little my mother would say she was going to die and pull on my toes while I was sleeping if I was bad. Apparently that's what Cuban ghosts do.
Fave insect
Ladybug

Do you want to get married?
Eventually
I understand that she did. No idea if she's still married though.

Hair care regimen
I wash it

Best dream
The flying dream
I dunno about that. My flying dream is usually followed by my falling dream.