And now for something completely different....

We are going to deviate from our regularly scheduled crapitude to talk about something completely unexpected, some actual good writing!

Local Author Louis K. Lowy is having his first novel Die Laughing, published next month and I wanted to tell you guys about it. I know what you are thinking, Louis K. Lowy doesn't belong here, he's never written anything bad! Don't worry, we still have plenty of bad poetry to go around, but I thought it would be a nice change of pace to tell you about something that you'll actually enjoy reading. A palate cleanser if you will.

Die Laughing is the story of stand-up comedian Sam E Lakeside. On the verge of his big break he is forced into a scheme by a homicidal mobster and shape-shifting aliens to rob the earth of its oil.

I'll let Louis tell you a bit more about the book in his own words: 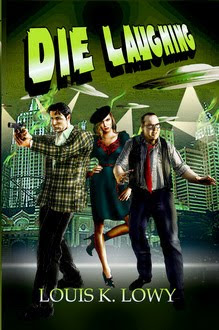 Can you talk about how much research went into Die Laughing? How did you go about it?

A lot. The story takes place in 1956 and I wanted to be as accurate to the period as possible. It was tough because every time one of my characters took a step or picked up something I had to make sure it not only existed at that time but was something that would have been used. For instance, there’s a scene when Cricket brings Sam E. a can of shaving cream. I researched to make sure that what she gave him, Rapid Shave, would have been commonly used.

I did a lot of research on clothes.

Also, I reference a lot of sci-fi flicks from that era. Before I could do that I had to make sure they were released before or at the time the story takes place. Depending on what movie I could use, that would sometimes shape the conversation.

There’s a lot of physical traveling in this story – Sam E. has to get from Las Vegas to New York City – so I had to make sure the roads they traveled existed in 1956. I found a 1954 Road Atlas on eBay. It was a huge help. They also take a Super Constellation airplane, which required tons of research. The list goes on and on, but truthfully in the long run it was a lot of fun.

How about quick history lessons for some of the younger readers that may not realize a lot of the characters in the book were real people. For example, The Steve Allen Show is a mayor plot point, but kids these days don't even know who Johnny Carson was.

My aliens can only copy people who have been broadcast over television airwaves, which was a lot of fun for me. I used icons like Lucille Ball, Alice Kramden, and Marilyn Monroe. One of the considerations when choosing who was going to be cloned was for just that reason, that the reader would recognize them. But I also felt it was important to add not-so-well known (in our era) characters who were prominent at the time. It added to the authenticity. Whenever I didn’t use characters as well known I would preface it with a brief explanation, for instance, TV evangelist Archbishop Fulton Sheen.

As for Steve Allen and The Steve Allen Show, I would compare them to a combination of David Letterman, Stephen Colbert, and American Idol. At the time there were only three major television networks, and there was no internet. This was the first time that electronic images were available in the home. People were glued to the TV. Television personalities like Steve Allen were the rock stars of their era.

3) Who are your writing influences?

For Die Laughing I think I honed a little from each of those sources. The concept of an epiphany from Joyce, the confluence of time from Vonnegut, the idea of plain and simple evil from O’Connor, strange creatures from the Lee & Kirby comics, humor in the creatures from Brown’s Martian Go Home, and plot twists and turns from Austen’s Pride and Prejudice.

You mentioned movie references. Which ones inspired Die Laughing?

Both the cheesy and the classic 1950’s sci-fi flicks. The Blob, I Married a Monster From Outer Space, The Day the Earth Stood Still, Plan Nine From Outer Space, Killers From Space, Earth vs. the Flying Saucers, It! The Terror From Beyond Space, and of course Invasion of the Body Snatchers. Anything that evoked the period.

When you started the novel, were you going for a lighthearted sci-fi comedy that became serious as you developed your main character or was it always meant as a dark comedy?

It was actually neither one. I never saw this as a sci-fi novel per se. I saw it as an individual’s struggle to find his sense of self worth. It was a dark story that got more humorous as I developed the main character. And thank goodness that it did. It makes for a much more compelling read. I wish I could take credit for that decision, but really, it was an unconscious move.

Well, I’ve been very lucky. Of the ten pieces in my short story anthology, eight have been – or are about to be – published. I’m trying to get the collection released as a book.

I’m touching up my second novel, Pedal. It’s a complete change from Die Laughing. Pedal is the story of a forty-nine-year-old fired music teacher who’s struggling to get her life back through bike racing.

I just started a third book, a sci-fi story that flips between planets and time. The working title is J-5.